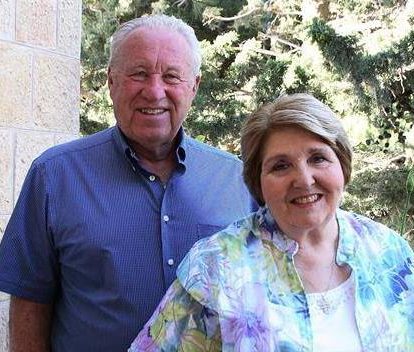 Greetings from Engeltal, (Angel Valley) in Arkansas.  Marylois and I are here during these winter months, but our hearts are still in Israel.  We are looking to return to the LORD’s Beulah Land in the Spring.  I begin this prayer letter with two questions posed by the disciples.  Two inquiries into what the end of the age would be like.

Christ’s words were direct, warning first that the disciples should first guard themselves against deception, for the “father of lies”, would cause many to follow after false Christs.  The next warning Jesus was to not allow themselves to give into fear, nor terror, nor panic during these evil days.  As His disciples they (we, too!) are to stand strong in the day of battle.  The words, “Fear Not! are found some 302 times in scripture.

The events of this past week, with the United States and Iran drawing nearer to waging war, frightened many and caused others to panic.  Marylois gathered the intercessors together in Engeltal and we prayed, asking God to intervene in this looming conflict.  By the next morning it was abated.  No further missile attacks by Iran on our troops.  Prayer is what makes a great difference, in any situation.

Much prayer is still needed in this volatile situation. Iran’s generals are still threatening attacks against the United States and Israel.  And the Forty First Anniversary of the overthrow of the Shah of Iran and the establishment of the Shiite Revolution occurs on February 11.  Warnings have already gone forth that Iran will mark this day with fresh terror attacks.

Please pray for this whole situation and for Iran.  There are thousands of hidden believers in Iran who have recently come to know Jesus.  Pray for a change in the ruling powers in that nation.  Pray also for the United States and those who are responsible in making decisions whether they be in the military or political.

Israel Aligns itself with the United States

Prime Minister Netanyahu this Wednesday in a new conference warned Iran against attacking Israel in response to the American killing last week of senior military commander Qassem Soleimani. “We’re standing steadfast against those who seek our lives. We’re standing with determination and with force. Whoever tries to attack us will receive a crushing blow in return,” he declared at a conference in Jerusalem.  “Qassem Soleimani was responsible for the death of countless innocent people,” Netanyahu said. “He destabilized many countries. For decades, he sowed fear and misery and anguish. And he was planning much worse.

“President Trump should be congratulated for acting swiftly, boldly and resolutely against this terrorist-in-chief, who was the architect and driver of Iran’s campaign of terror throughout the Middle East and throughout the world,” he added.  “In the Middle East, no day is like any other. The regional upheaval continues. The struggle between extremists and moderates continues unabated,” the prime minister went on. “On one side is radical Islam led by Iran, which seeks to grasp large sections of the area by means of murderous terrorism, and to grasp, strangle and eliminate us, because they understand that the strongest force of Western culture is here, in the State of Israel. They understand this very well.”

Prime Minister also declared that “Many leaders in the Middle East agree with him, the region is split between radical Islamists and a “pragmatic camp” that is threatened by the extremists. “This camp well understands the campaign for existence, for life and for the future,” Netanyahu said. “The State of Israel is the anchor of stability in these stormy waters. The challenges that we are dealing with are not lessening — on the contrary.” www.timesofisrael.com

Pray for the safety of Israel and that no plot, plan, strategy or deception of the enemy would succeed.  Pray for wisdom for Israel’s leaders as they seek ways to combat these threats, protect this nation.

Israel, as a Jewish State finds itself in the crosshairs of Iran’s evil designs to destroy it. Iran has equipped its proxy army in Lebanon, with over 150,000 short range rockets as well as GPS missiles.  Hamas, another terrorist entity controls the Gaza Strip and is supported also by Iran.  Hamas by the latest estimates has another 10,000 rockets, this daily threat has caused Israel to develop defensive measures to protect its population in case of war.

This week, Israel’s Defense Ministry revealed a breakthrough in laser technology which is expected to complement the country’s Iron Dome anti-missile system. The new laser-based system is built to intercept rocket, mortar, and artillery threats, drones, and anti-tank guided missiles. It will undergo testing in the coming months with the goal of having it operational within a year and a half. The laser-based interception, which is silent and invisible, is based on electric laser technology rather than the chemically based lasers used up to now. (www.jpost.com)

“The Heavens Have Opened”

This week, the winter rains have been drenching Israel.  Tel-Aviv, Nahariya, and other cities have been hit hard by floods.  Seven people have perished.  Streams are flowing in the desert and the Lake of Galilee has risen some three feet, and over 9 inches alone in one day.  These rains have broken a 51-year record, established in 1969.  Several meteorological stations in the north recorded an average of 350 and 400 mm (13.7-15.7 inches) of rain that had accumulated since December 25, with some areas in the Western and Upper Galilee seeing up to 450 mm (17 inches), the highest amount measured in two-week time since January 1969. www.ynetnews.com

Regarding the floods of rain which has covered Israel, a prophetic friend of ours was drawn to a scripture in Paul’s letter to the Corinthians. Paul writes: “Howbeit that was not first which is spiritual but that which is natural and afterward that which is spiritual” (I Cor. 15:46).  It was as if God is speaking about what is happening presently in the natural to Israel is even a greater sign of what is to come.

May the Lord quickly send His Spirit of revival into this land.  May these great rains, be a prophetic sign of an even greater revival of the Holy Spirit among His people.