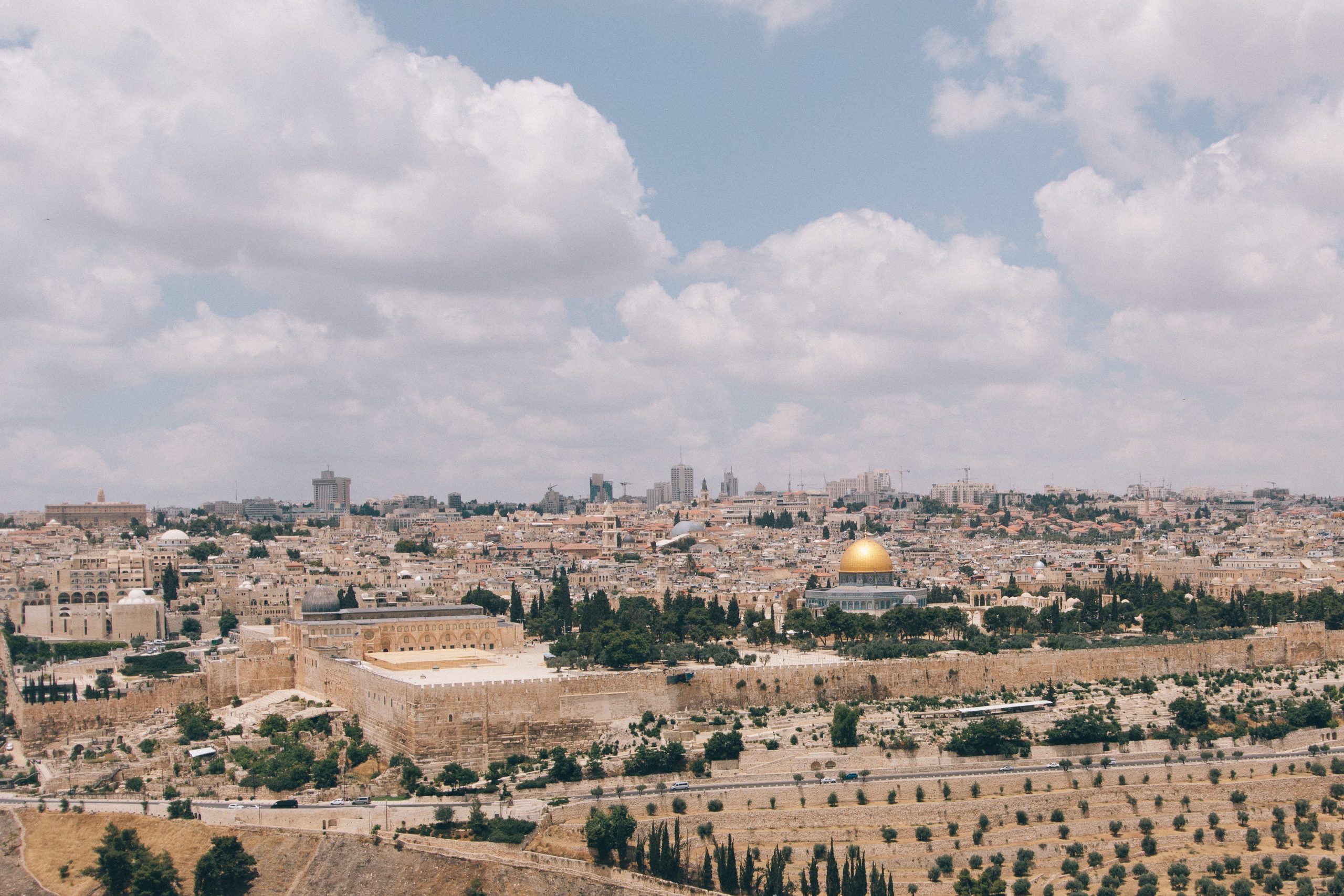 “Thus saith the LORD GOD; This is Jerusalem: I have set it in the midst of the nations and countries that are round about it.” Ezekiel 5:5

Jewish legends cite that when the earth was created, God began his work by placing first a foundation stone. This stone is known as the Even ha-Shetiyah, which formed the base for the whole world. Upon creation, “the Holy One detached one precious stone from underneath His throne of glory and sent it into the abyss of darkness. One end remained fastened to his throne while the other end stone out above. From this point, the world was founded, spreading out into all directions. “

Abraham came here to sacrifice Isaac on this stone, and found instead a ram provided by God as a substitute. David offered sacrifice here, on what was then the threshing floor of Oran. Solomon built a magnificent Temple to the LORD at this site and placed the Ark of the Covenant over this stone. Here all of Israel worshiped the LORD God. Later the Second Temple was built over this location. Rome then destroyed it, and Hadrian set a statue to the god Jupiter on this stone. Then after many years, Islam’s followers covered it with the Dome of the Rock.

Google 31 degrees 777 minutes North Latitude and 35 degrees 229 minutes East Longitude on the internet and you will find Jerusalem’s world location. Better yet, purchase a Jerusalem Compass through your local App Store and you will always know the direction in which the Holy City lies. Jerusalem throughout history has always been identified as the center of the earth. An alternative reading for the Hebrew word “midst” can be translated “navel.” 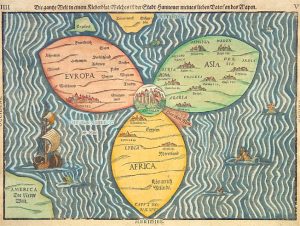 Early Jewish sages wrote: “The Almighty created the world in the same manner a child is formed in its mother’s womb. Just as a child begins to grow from its navel and develops into its full form, so the world began from its central point and then developed in all directions.” The “navel” of the world is Jerusalem and its core is the great altar of the Holy Temple. Following up this thought, a German cartographer named Heinrich Bunting, in 1541 drew up a world map shaped like a cloverleaf. The central point of Bunting’s creation is Jerusalem. The three continents of Europe, Asia and Africa are spread out as leaves. The map is entitled in Latin: “Umbilicus Mundi” or “Navel of the world.” Bunting, a theology professor, drew his map to illustrate Jerusalem as being the spiritual center of the earth.

Of course, finding the exact center on a sphere such as our planet is problematic. In the natural, some might say, it’s within the earth. Yet there are focal points which can be determined regardless of the shape of our planet. Statisticians might cite population centers while geographers would pinpoint a certain land mass as being the center of the globe. God’s word to Ezekiel makes it clear. Jerusalem is in the midst of the nations. He set it there. All nations and lands are aligned to its position.

Isaiah declared that “Out of Zion shall go forth the law and the word of the LORD from Jerusalem” (Is. 2:3). Jesus initiated the New Covenant in Jerusalem, and then after his resurrection commanded the disciples to go forth and preach the Gospel  (Acts 1:8). It was from Jerusalem that the Holy Spirit fell upon the 120 disciples, who then founded the early church. Jerusalem’s call is to be the spiritual center of this earth, a call that neither Rome nor Mecca can ever fulfill.

God’s Perfect Plan
The LORD God in founding Jerusalem, planned for it to be a city that would reflect His glory. Jerusalem was to be an example for all nations to emulate. Here was His Presence, here was the Holy Temple, and here were His holy people. Prayers and offerings were sacrificed daily to Him. It was to be a place of worship. Yet, Jerusalem and the whole country choose to walk away from God’s design.

The scriptural passage cited in this devotion, is followed by the LORD’s sentence against this city and His people. “They have changed my judgments into wickedness more than the nations” around about her. Therefore the LORD declares that He will “execute judgments in the midst of thee in the sight of the nations” (vs. 8). Jerusalem and all of Israel rebelled against its God and in doing so “defiled my sanctuary with all thy detestable things.” Thus fearsome judgments are pronounced against this city and the nation.

Jerusalem by deviating from God’s perfect desire for it, has reaped a “whirlwind.” Disobedience and rebellion always exacts a high price for its freedoms. Proverbs declares that “The wicked is driven away in his wickedness” (Pr. 14:32a).

Jerusalem for its sins would become a “waste and a reproach among the nations” (v. 14). The LORD declared that He would make Jerusalem a “instruction and an astonishment to the nations.” The sword, famine, pestilence and wild beasts and blood would pass through its gates and the dwelling places of the cities (Ezek. 6:6). Only when the idols were destroyed and the high places desolate, a remnant will be left. This small residue of God’s people would then know that, “l AM the LORD” (Ezek. 6:11-14).

A City of Glory
The LORD in His wrath demonstrated that He is like the potter whom Jeremiah went to see. It is He who discards Jerusalem. It had become a vessel of wrath prepared for destruction. The LORD’s perfect plan was/is that His city would become a habitation of His glory. A vessel that would honor Him. A new Jerusalem, fulfilling God’s word where upon He “shall yet comfort Zion, and, choose Jerusalem” (Zec. 1:17).

Set among the Nations
We as believers are to be like the natural Jerusalem, “A city set on a high hill.” We are to let the light of Christ shine from us. Our walk is to be holy, our witness not corrupted, our speech seasoned with salt and not evil. We are to walk circumspectly, redeeming the time. The Jerusalem of Ezekiel’s day suffered God’s judgments. It became a horrifying example for the godless nations. The Jerusalem to come will be a city of God’s desire.

Hath not the potter power over the clay, of the same lump to make one vessel unto honor. And another unto dishonor? What if God, willing to show his wrath, and to make his power known, endured with much longsuffering the vessels of wrath fitted to destruction: And that he might make known the riches of his glory on the vessels of mercy, which he had afore prepared unto glory (Rom. 9:22-23).

God’s Purpose for the Christian
The disciples fought among themselves over “who should be the greatest among them.” They wanted the glory of recognition. They wanted to be “first” and “foremost” above each other. The Pharisees had this problem. They loved the praises of men. Jesus instructed his disciples that “If any man desire to be first, the same shall be last of all and servant of all.” We as followers of Jesus are to be like children innocent, humble and trusting.

A Word from the LORD
Make me the center of your life, for I desire to be the center of all that you do. Keep me foremost in your thoughts and in your behavior. Allow me to keep you in balance for I am your plumb line. Abide in me and I will abide in you. Grow in my fruit of self-control and you shall become even of temper. You shall not be easily offended. The tempter shall not sway you. Center yourself in my will and I will grant you good success. Focus your love on me and not the world. I will lead you to those who are unlovable, unloving, and unlovely. You will be my arms to them, ministering my healing love.

As you center yourself in me, I will place my anointing in you, to heal, to deliver, to impart joy. I will give you a ministry with miracles, signs and wonders, to do good and bring in my kingdom. Center your ministry in me not on yourself. I will then lift thee up and you shall ride the high places with me. Allow me to use you to impart my perfect love.

Devotional Prayer
Thank you LORD, for you have truly laid “in Zion for a foundation stone, a tried stone, a precious corner stone, a sure foundation.” Whosoever believeth in you “shall not make haste” (Is. 28:16). Jesus, you are the chief cornerstone, the stone that the builders rejected. It is a “stumbling stone and a rock of offense” to some (Rom. 9:33).

Paul writes that “whosoever believeth in (you) shall not be ashamed.” It is upon your foundational “rock” that my faith is established. Help me in the midst of my walk. Help me not lose my focus on earth’s rewards and the love of all men. Help me pick up my cross and follow you wherever you lead me. Fill me with your joy today and every day I live. My I always declare: Jesus, you are the rock Of my salvation and the lover of my soul.

Scriptural Reflections
“And whosoever shall fall on this stone shall be broken: but on whomsoever it shall fall, it will grind him to powder” (Mt. 21:44).

“According as he has chosen us in him before the foundation of the world, that we should be holy and without blame before him in love” (Eph. 1:4). 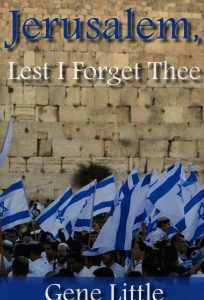