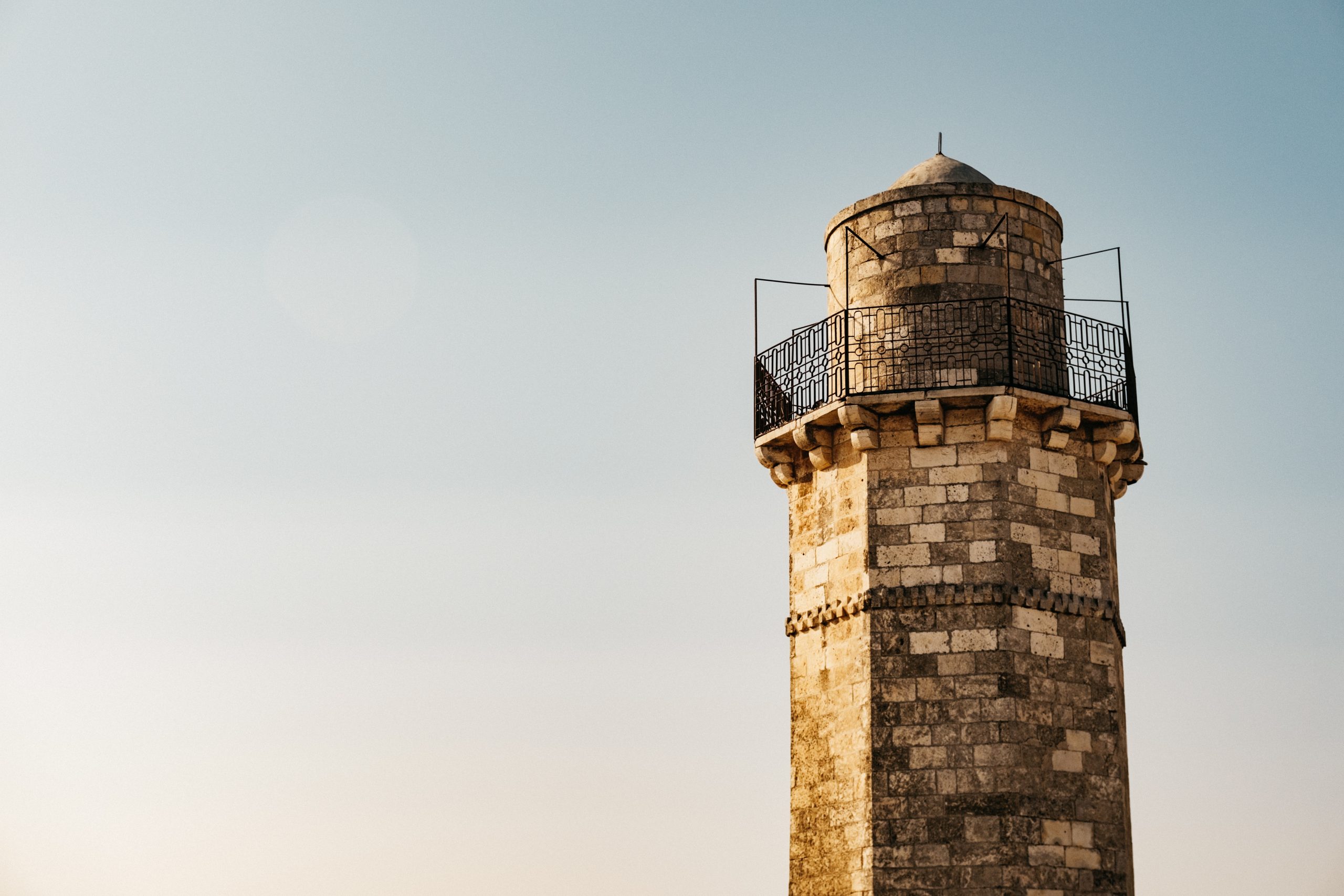 “I have set watchman upon thy walls, O Jerusalem. Which shall never hold their peace day nor night: ye that make mention of the LORD, keep not silence, And give him no rest, till he establish, and till he make Jerusalem a praise in the earth.” Isaiah 62:6-7

Jerusalem, since ancient times, has been known for its walls. These massive stones have protected the city’s inhabitants in the past and continue to do so today. The current walls were set in place in 1541, by Sultan Suleiman, who authorized their construction. The project took some four years and generally followed the lines of previous fortifications. These walls have an average height of forty feet, a thickness of some 8 feet and encompass the city for two and a half miles. Thirty four watchtowers are positioned along the course of the ramparts.

The city was much smaller in Isaiah’s time, and remnants of earlier bulwarks have been discovered. Archaeologists exposed large portions of Hezekiah’s wall in 1984. They also estimated that Jerusalem as a city covered some 135 acres. A portion of this wall is visible in the Jewish Quarter today which was repaired by Nehemiah. Both older and newer walls had one thing in common: watchtowers to guard the city.

Watchmen
A city’s walls while serving as the first line of defense against invading armies, still needed a company of watchmen to patrol the ramparts. These sentinels would sound an alert if a king was approaching or if enemies were sited. They were the guardians of the day, warning of impending trouble, or of messengers bringing news (II Sam. 25-26). Nehemiah set a watch day and night against those that conspired “to come and fight against Jerusalem”, and to hinder the work (Neh. 4:9).

These days, the ancient watchtowers of Jerusalem are empty. The watchmen have been replaced by surveillance cameras and security balloons with sensors. Foot patrols still guard the streets of the Old City. At times, Israel has stationed “observers” on its walls, particularly by Damascus Gate, a place where Islamic terrorists have staged attacks.

On Your Walls, O Jerusalem
Ezekiel was tasked by the LORD to be a watchman. His duties were “to warn the wicked from his way” (Eze. 33:7-9). He was to warn the whole house of Israel. The prophet had a spiritual responsibility to stand before the people and God. Habakkuk also speaks about watching. He declares that, “I will stand upon my watch, and set me upon the tower, and will watch to see what he will say unto me, and what I shall answer when I am reproved” (Hab. 2:1). The prophet in this instance had a set time to seek the LORD. It was his “watch” or time of prayer.

The LORD God declares in Isaiah that it is “He” who has placed watchmen on the walls of Jerusalem. These watchmen are spiritual guardians, who have been tasked to continually remind the LORD of His promises regarding Jerusalem. Two appeals are made. They are to keep not silence, and give God no rest.

As the LORD’s sentinels they are to continually sound the alarm. They must blow their shofars with a high pitched rapid warning. Day and night, they must assail heaven with their trumpeting roars, until Jerusalem becomes a praise in the whole earth. Let the watchmen’s cries echo throughout Heaven. Let there be not one quiet place in paradise where the LORD can retreat in silence. Give the LORD no rest in the natural, and in the spirit make your decrees.

The LORD God though has no need of rest in the natural since He is always “on watch.” He neither slumbers nor sleeps (Ps. 121:4). Elijah taunted the prophets of Ba’al about their god not answering “for perhaps he is sleeping.” Our God is ever vigilant. Even so, He is tasking His prayer warriors to keep on, keep on, and keep on reminding Him to “make Jerusalem a praise in all the earth.”

The LORD Himself promises that “For Zion’s sake, I will not hold my peace, and for Jerusalem’s sake I will not rest until the righteousness thereof go forth as brightness and the salvation thereof as a lamp that burneth” (Is. 62:1).

It was the responsibility of the Levites and the priests in Isaiah’s time to come before the porch and the altar and pray. They were the first “watchmen” that the LORD tasked with reminding Him to reform Jerusalem into a city of righteousness and praise. Sadly, the leadership of Israel, the priests and the people left the LORD, worshiped idols and rebelled against His laws. Jerusalem, for a season, became a heap of ruins.

The word spoken through Isaiah is Messianic. It heralds an era when God’s justice will triumph. The Hebrew word tsadaq means to speak the truth. Jerusalem will also lead the nations into paths of righteousness. The Hebrew word yashar in this instance means “to be straight in the way,” and/or “possess integrity.” Zechariah promises that the nations shall go up “to worship the King, the LORD of hosts and to keep the feast of Tabernacles” (Zec. 14:16).

Three Hebrew Words
The Hebrew language has three words to describe watching. The first, iyr, means “a watcher or wakeful one.” Daniel in his visions saw “a watcher and a holy one came down from heaven” (Dan. 2:13, 17,23). These are angels who guard or watch. The word also signifies prophets who have been called to hear God’s word and warn the people. Shamer is another word found in the Hebrew language and means “to guard, to protect, to hedge about, and to watch.” A watchman is a shomer. The LORD God is the Shomer Yisrael or the “Guardian of Israel.” A third word, notzri, derives from the verb natzar and it also means “to guard and protect.”

The English word for Nazareth comes from the Hebrew word for branch, and means a shoot or sapling. Jesus who is the root and branch of David grew up in a village named “the Branch.” Notzri also means “to guard” or “to be a watchman.” The word “Notzrim” in Modern Hebrew today means Christians or those who “watch” (i.e. watchmen). Thus believers in Yeshua are part of his “Branch”(Jn. 15:5), but also are “watchers” who are looking for the coming of the Messiah.

Upon Your Walls
Jerusalem has its own army of watchmen or “notzrim.” Every morning, except Shabbat, a Dutch citizen named Bart Repko leads a prayer walk on top of the Old City’s ramparts. Here he and his fellow walkers proclaim scriptures from the Old Testament, reminding the LORD God of His promises. These “watchmen” declare verses in Dutch, English, German, Korean and/or any other language, depending on who is in the group. Repko states that the goal of his ministry is not only to remind God of his Word, but to encourage others to do the same.

In a blog article on his website*, Repko states:

“We need help, watchmen who speak different languages, watchmen who do not give themselves or Him a moments rest…. Who knows you might be a watchman? Call out to the Lord, come to Israel, join us for a week on our walks and seek to find out if He is calling you to be a watchman who gives yourself or Him not a moments rest. See you on the walls of Jerusalem.”

A Word of the LORD
It is I who stand at the door of your heart and knock. It is I who calls you to arise in the night seasons and pray for My beloved city. It is I who tasks you to sound the alarm and cry out to Me to make this city a praise in the earth. Pray for righteousness to reign forth. Pray that the nations see Jerusalem as I intend it to be. Pray that My will be accomplished here, and not their will.

I speak to this city — O virgin daughter, lift thyself up and make ready for your King is coming. Sing, O daughter of Zion, and rejoice for you will be an eternal excellency to Me and a praise in all the earth. Here I will rule. Here I will reign and here all the nations will look towards you, Jerusalem, and rejoice.

Devotional Prayer
LORD, we declare your Word over Jerusalem:

“At that time will I bring you again, even in the time that I gather you, for I will make you a name and a praise among all people of the earth, when I turn back your captivity before your eyes, saith the LORD” (v.20).

“Blessed are those servants, whom the lord when he cometh shall find watching: verily, I say unto you, that he shall gird himself, and make them to set down to meat, and will come forth and serve them” (Lk. 12:37)

“And shall not God avenge his own elect, which cry day and night unto him, though he bear long with them? I tell you, that he will avenge them speedily. Nevertheless when the Son of man cometh, shall he find faith on the earth” (Lk. 18:7-8).