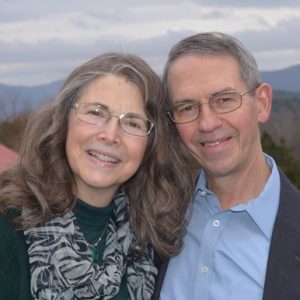 Love and greetings from Engeltal, the Valley of Angels! Recent mornings as I have trudged through the snow to the office, I have so enjoyed God’s bejeweling of the blanket of white. No artist compares to Him as He bedecks the mountains and trees with glittering white and contrasts it with a deep blue winter sky. And He makes it possible for us to know what creatures have run across our yard in the night. The deer, the dogs, the squirrels, and the birds have all left their tracks in the snow.

The last two winter storms have brought us a total of about six or seven inches of beauty and some complications.

Last Saturday, Philip noticed the water pressure was low when he got up in the morning. He went outside to investigate and found that the ground was bubbling with water along a main line from our spring. This also affected Zion House (where Gene and Marylois live) And Bethlehem (the ladies’ dorm). Thankfully, Philip had had the foresight last summer to purchase a connector that we could use from the small hydrant outside our house that is from a different water system to a hose.  So, he ran hoses to these buildings, wrapped the hydrant with heat tape and insulation, and we let the faucets run a bit. Miraculously through subzero weather, the hoses running along the ground did not freeze! A couple of days ago a pipe broke in Bethlehem, presumably from more water pressure than it’s used to having, but it looks like it’s going to be fixed today, thank God, and thank Bill Bethke!

Our power has stayed on, although now that the snow is melting some, we are having a lot of brief interruptions in our electric service. We thank God for battery backups on our computers so we can keep working.

Foresight helps us prepare for potential difficulties. It’s a gift from God that we all need to press in for. Ask God every day to help you obey the promptings of the Holy Spirit. It could save your life!

Even though we only get a storm like this about once in a decade or so, we are better prepared than the folks in parts of Texas who haven’t seen snow since 1973! It’s tragic to learn that a family foolishly connected the exhaust of their car to their house, hoping to heat their home. The mother and eight-year-old daughter didn’t live to tell about it.

Maybe you know better than to connect your car to your home, as they apparently didn’t, but sometimes ideas are suggested to our heads that would be dangerous! Pay attention to that check in your spirit that says, “No, don’t do that!” Think about the serpent suggesting to Eve that the fruit of the tree of the knowledge of good and evil would be delicious and give her wisdom. She had never heard of deception before. She didn’t know that evil existed let alone that she was talking to it. Deception is so insidious that we must be on the lookout for it and obey the Holy Spirit when He instructs is to walk away.

Melted Hearts: Philip and I were reading in the book of Joshua this week. In the second chapter, Joshua sent spies to Jericho. Rahab hid them, knowing who they were and the mighty power of the God they served. She said, “I know that the LORD hath given you the land, and that your terror is fallen upon us, and that all the inhabitants of the land faint because of you. For we have heard how the LORD dried up the water of the Red sea for you, when ye came out of Egypt; and what ye did unto the two kings of the Amorites, that were on the other side Jordan, Sihon and Og, whom ye utterly destroyed. And as soon as we had heard these things, our hearts did melt, neither did there remain any more courage in any man, because of you: for the LORD your God, he is God in heaven above, and in earth beneath” (Joshua 2:9-11).

Imagine what it must have been like a few days later when the priests bearing the Ark of the Covenant stepped into the Jordan River and the waters rolled back so that the children of Israel could come over on dry ground as they or their parents did through the Red Sea forty years earlier. The Jerichoites knew that story. They all must have climbed up on the wall to watch as the multitudes came across where the river had been. How perplexed they must have felt, knowing that they were the first city on God’s agenda. Their hearts were melted. Courage failed them. They had no precedent on which to hope.

While the Israelites camped out at nearby Gilgal and circumcised the men who had been born during the wilderness wanderings, the inhabitants of Jericho couldn’t imagine what was taking them so long to attack. Perhaps they did whatever they could think of to prepare but awaiting the inevitable must have been agonizing.

Imagine the enemy: So let’s bring this story into today! The forever loser knows his time is short and so do his minions. They are desperately trying to use distortions, shadows, lies, deception, smoke and mirrors to thwart the Promised Outpouring, but I believe that they are seeing the handwriting on the wall! Their hearts are beginning to melt! And the people who are working so closely with them are also beginning to lose their grip! It appears that they are fighting desperately in their attempt to control the earth, but the more we pray for the conviction of the Holy Spirit to fall upon them, bringing repentance by the goodness of God, the more their network will unravel! Some “big fish” are going to repent and be saved by the mercies of the Lord. Even some of their kingpins who have been giving orders are going to leave the kingdom of darkness and enter into the Kingdom of God’s dear Son! And some who refuse to repent are going to be removed by the judgments of God. The unraveling has begun and it will set the powers of darkness back in a huge way! You will be very encouraged by the vision (below) that Ridings had in November in Jerusalem.

Keep up the prayer! We are still standing strong every evening at 6 PM Central on our Firewall Prayer Call. We hope that you will join us as you are able, to add your agreement and Holy Spirit supply to the intercession. It’s working! The hearts of our dark adversaries are melting! The number to call is (425) 436-6348. When the automated answer comes, it will prompt you to enter 7411925#. We look forward to praying with you!

Convention 2021: After I announced in our last prayer letter that we were still looking at the possibility of going to Dallas for Convention 2021, our Board of Directors met and directed that we needed to have our gathering virtually as we did in 2020. The hotel was gracious again to allow us to cancel without penalty. So keep the dates open: June 29 – July 2.

Blue Mountain Christian Retreat: We have also been in touch with our friends in Pennsylvania regarding our annual regional convention that we’ve been holding there since the 1970s. Last year we didn’t go and held the event virtually from our headquarters here in Arkansas. We have just confirmed this week that we will be doing it virtually here again. So, keep the dates of May 14 – 15 open to join us online for that event.

Thank you! We are so grateful and deeply appreciative of all who are standing with us in their prayers and Holy Spirit prompted giving. We bless you in the Name of our Almighty Lord and Savior, Jesus Christ!