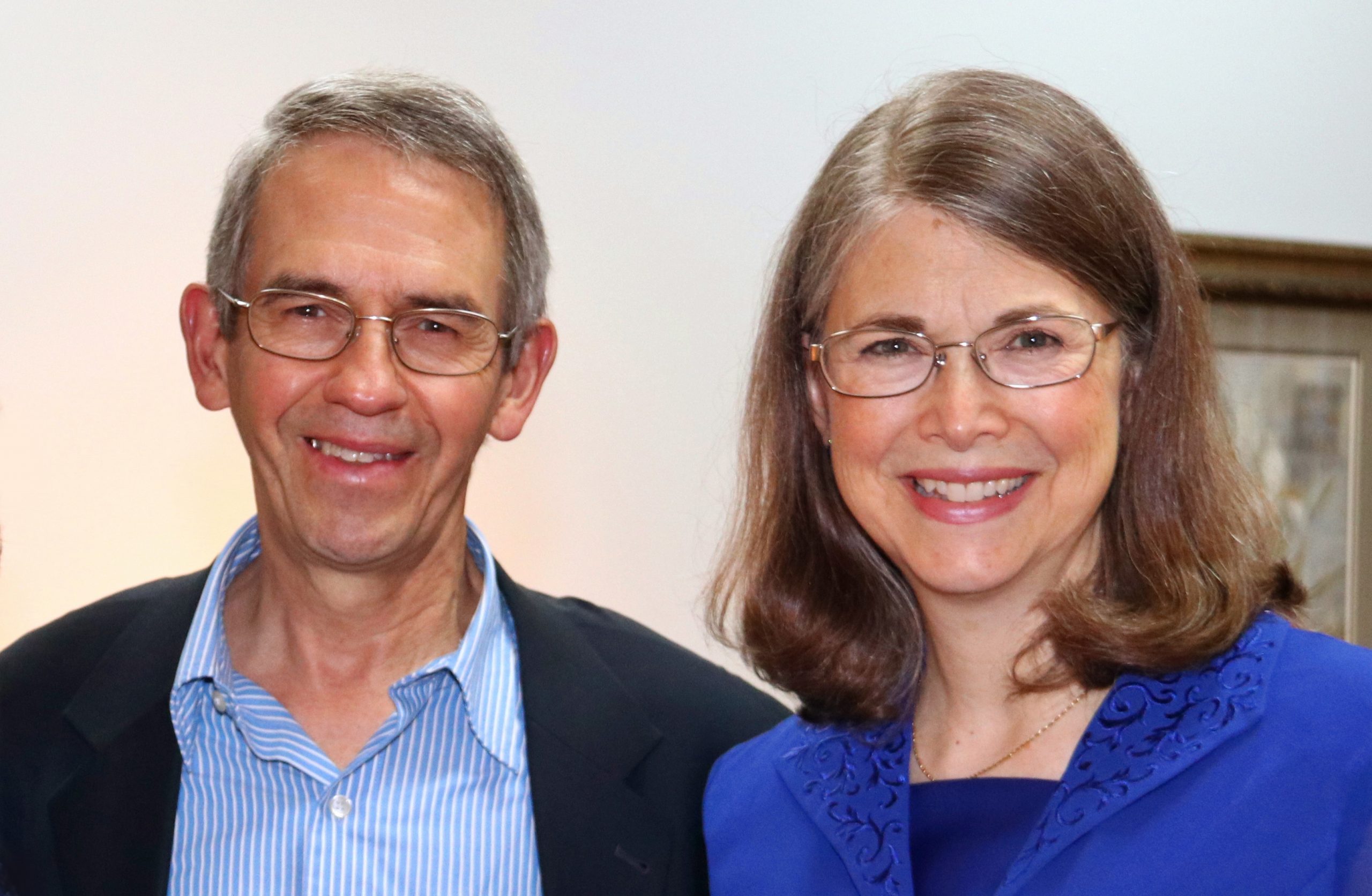 Loving greetings from Engeltal! Philip and I have just returned from three weeks in India. I could use a number of adjectives to describe those weeks: glorious, trying, difficult, intense, rewarding, productive—all of them fit together to give you a small idea of something that can really only be told in full from the other side of eternity!

When my parents went to India in 1953, missionaries had to have another reason to be there. My dad taught agriculture, bringing new farming techniques, helping to introduce the disease-resistant poultry, and digging wells to provide fresh water for the villages. Now it is even harder to do missionary work as a foreigner in India. The ruling party in the current government is strongly Hindu, and is working to make India a specifically, exclusively Hindu nation. They are trying to make other religions illegal, and are forcing all schools (including Christian ones) to teach Hinduism, making the children recite Hindu prayers. Elections are coming this spring, so prayer must become intense regarding these issues.

The late Prime Minister Indira Gandhi’s granddaughter has joined the race recently. Under her party’s rulership (that is, the Congress Party), all religions enjoyed the freedom of religion for which the Indian constitution provides. This young woman was mentored by her grandmother and many people feel that bringing the Congress party back into power will be like bringing Indira Gandhi back and would be good for the country. Please pray for the Lord to have His way and glory in the coming elections.

Because of the current political climate, and persecution of Christians and other minorities, we cannot share in detail about all the things we were able to accomplish or the specific places we visited. Suffice it to say that seekers and new Believers received foundational instruction, and mature Handmaidens and Servants received sound, biblical teaching on redeeming the land and encouragement to walk in the Spirit as mature sons of God. Of course we were only “sharing” as foreigners are not allowed to preach! In some places we were the first foreigners they had ever seen!

At the end of our first week, we were joined by Bob Baldwin, Margaret Walters, Quintessa Lawrence, and Tabitha Peter, all from our staff. We went into the mountains to visit our ETH&S and bring them the support and encouragement that Glenn and Charlen Logemann ministered for many years. Although we were withstood by symptoms of colds and digestive troubles, God gave us great victories as we ministered around that region.

At the end of our second week, we rearranged into two teams, sending Bob, Margaret, and Tabby southward, and Quintessa, Philip, and I westward. We went to an area where we heard stories of persecution. House churches have been shut down as illegal because they were not registered with the government. The government itself declared that 20,000 Hindus had become Christians and that infuriated the Hindu extremists. We met a couple who were badly beaten, along with four others. Their story has been documented on a YouTube video, but the police refuse to register the incident. Lawyers are preparing a case to establish justice for them under the constitution. Please pray for this.

One of our ETS has a “conversion” case against him in a high court. He is being accused of paying or bribing people to convert to Christianity. Of course there is no evidence to support the accusation. And the Lord had given him a strategy to have converts voluntarily appear and give sworn testimony of their freely chosen conversion and that they were not coerced in any way. So these testimonies are on judicial record to stand on his behalf.

We could only be there briefly. We had to “blow in, blow up, and blow out”! There could be no advertising that we were there, and we could only “share,” but the Believers were greatly encouraged.

One area where it may be possible for foreigners to help the Body of Christ is in bringing American English teachers to the Christian schools. Since so many of the jobs for computer technical support are being done from India, they need to have teachers that can help these young students learn English that Americans can understand. Please pray for God to raise up teachers that will help fill an important gap and meet spiritual needs as well. We know of one school that is looking for a couple to come for two years to administrate the school and teach English.

In our travels we met several rock-solid men and women of God who are fearlessly doing the work of the Kingdom of God and their children and grandchildren are also following them in the ministry. They have built schools by faith to educate the poor. Nearby are other organizations (some Christian) who are making a profit in their schools by charging high fees, but these men and women are out there obeying the Heavenly vision by faith, without promise of support. It was inspiring to meet them. Their faces shine with the love of God and their relationship with Him is evident. Some even gave us love offerings—unheard of in the India we used to know. The Body of Christ is flourishing in India and seeing the Holy Spirit sweep in a great harvest.

In another place we met a young woman who had come to a major city from another state in obedience to the Holy Spirit. She brought two of her converts with her. The first, a young woman, had witchcraft worked on her when she became a Believer. She was totally weak and became bedfast for months. Finally the pastor lady talked to the girl’s parents, asking if she could take her to church. The father blamed her for his daughter’s sickness, but said that if she could get better, the pastor could “have her.” So each Sunday she was brought to the church for prayer (and the saints fasted), and by the third week, she was completely healed! The father tried to renege on his word, but the pastor prayed and fasted and he finally gave his blessings. Now she works heartily with the pastor in her kindergarten and other projects in the slums.

The second convert to whom she introduced us was a young man who was the first convert in his village. And through his faithfulness to the Lord, there are now many converts in that village, hallelujah!

As we were working out our itinerary for this journey, we received a letter from Sister M, an ETH whose photo was on the wall of our office when I first arrived at Engeltal in 1977. All these years we have been supporting her and her family in their Gospel work. In her letter, she told us that her husband of 63 years had passed away in December and how sad and lonely she was. I felt strongly that we should go to her to encourage her. I asked one of the ETS who was coordinating a part of our journey if he knew her and he said he did, so we included her city in the schedule. By the time we had been with this ETS, we learned that God had sovereignly helped him build a home for his wife and children in that same city because it was so dangerous for them in the place he was preaching. We also learned that his father, to whom Sister Gwen referred as a “comet in the sky—shining brightly, but briefly,” worked with Sister M’s husband! It was deeply moving to meet them and to hear the testimonies of her husband’s faithfulness to go about the city on public transportation, ministering and praying for people, even in his 80’s. He was even preaching to the nurses when he was on his deathbed. He had turned the pastorate of the church over to his son some years ago. When we were with them, we learned that the son had also passed away in 2017, and now his wife is carrying on the work. Please pray for this family. They have been listed on our Prayer Letter for years. Now you know a little more about them. I felt that meeting with them was like the icing on the cake!

The next day, before we were scheduled to fly out of the country, we received an invitation to minister in a Bible school in that same city. It was the common denominator for a number of the godly ministers who impressed us so much—they had all attended this Bible school! We learned that Sister Gwen had ministered there back in the 1960’s and we met a brother who remembered her being there. Two of the past principals and other guests “just happened” to be there. It was such a privilege to share the Word of God and tell testimonies of His greatness in Sister Gwen’s life. I shared her calling to China in a powerful move of the Holy Spirit in her Bible school days, and how she went to the mission field by faith. I told how the Lord used a man from India who was so mightily used by God in revival and how he shared the secret of fasting with her, and God gave her the life-changing fast that became the pattern for the End-Time Handmaidens and Servants. We planted seeds of faith and vision and urged them “obey God!”

We packed in as much ministry as we could in the time allotted before we had to leave for the airport, including prophesying over some and laying hands on all the students, hallelujah!

We have had some wonderful reports from Bob, Margaret, and Tabby, as well:

“We had a glorious reception of about 40 persons they gave us roses and garlands, then we had some refreshments and met the orphans and greeted the people! The reception was astonishing!

“There are about 80 churches and a new hospital ETH helped with in an area that was completely without medical help.

“We are experiencing a wonderful move of God — Holy Ghost Healing — Filling — changing Lives — people asking to be Baptized ! The love of the people and testimonies from our last visit amaze us!

“We visited the tribal area today where the two pastors were killed! Sixteen pastors waited six hours for us to get there! What a hunger! Then we also visited a new school that our sister is starting in a tribe the government refuses to help because they migrated from another state 60 years ago! A young woman is teaching the 10 students who would never learn to read or write! This is opening the tribe to the Gospel. The pastors live daily in danger.

“Margaret brought a party to our sixteen orphans we are helping here! Balloons, blow toys, rings, necklaces! What a time they had!

“About 10 youth received Christ one want baptism tomorrow the other may come! They are Hindus breaking from family and express fear.

“We were teaching senior pastors how to prepare for end time events! Tabby baptized two more. We had several filled with Holy Spirit.”

So you can see that God is on the move in India. Between our two teams we have ministered in eight states of India. Bob, Margaret, and Tabby will be there for another week, so please keep them in your prayers.

Thank you for your continued prayers and support for the missions the Lord is doing through ETH&S. We want to see this aspect of the ministry continue to grow and bear much fruit!