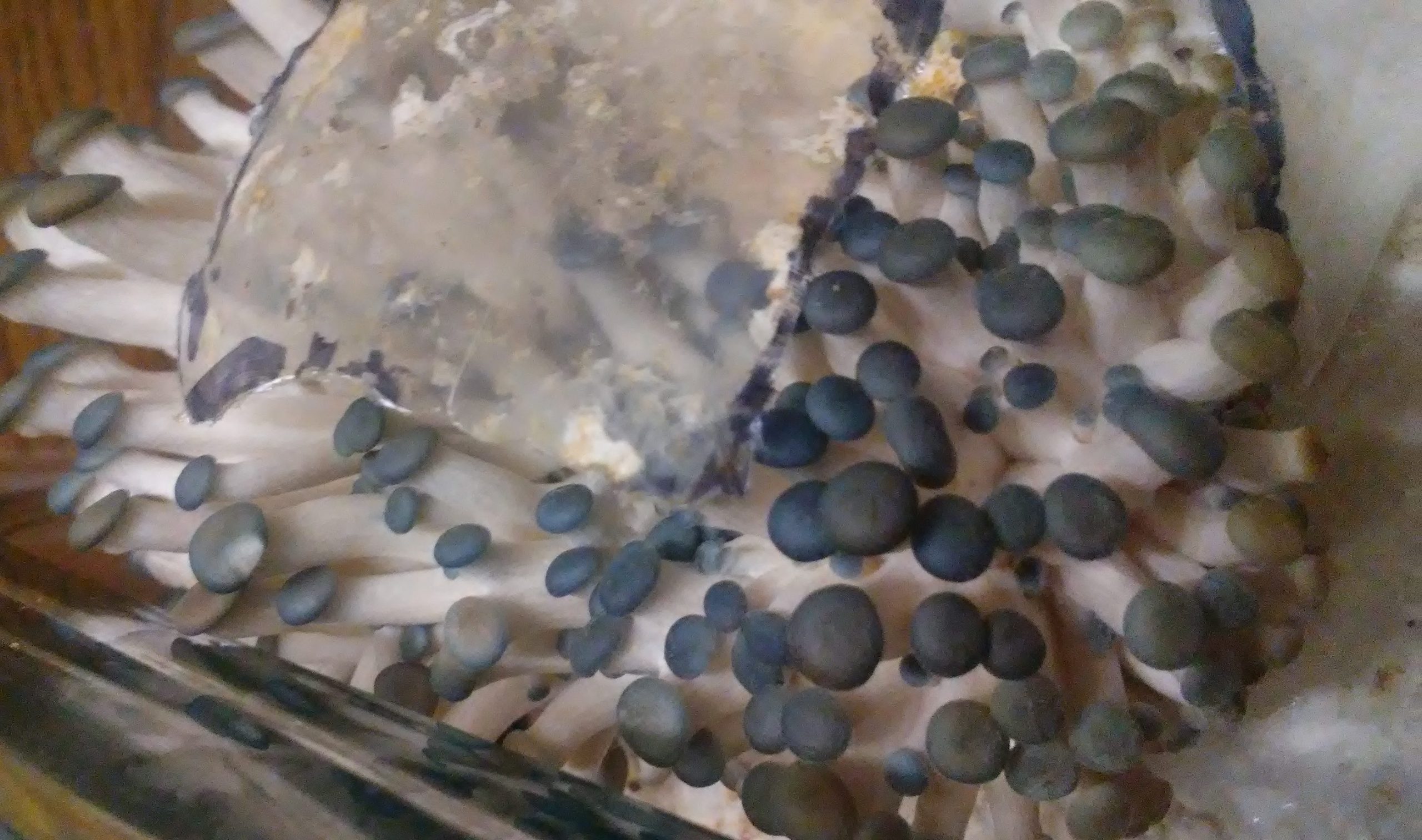 I decided months ago that I wanted to start experimenting with growing mushrooms. This is my 10 LB Blue Oyster mushroom block. I followed the directions and eagerly awaited my first flush of mushrooms. A few days after I got the package, I discovered a dead Japanese beetle in the bag. Unsure of what else to do, I cut off the top of the bag to remove the offending insect. However, this left my block uncovered as I didn’t have anything large enough to fit over the top. It began to crack. I decided to leave it as is. My first flush began a few days later. Sadly, the only place to keep this behemoth was on the top of my refrigerator. Between too much light and losing moisture, the block continued to crack, the mushrooms turned brown and began cracking as well. By this point, I knew I had to do something drastic or else I would be losing my investment. I rearranged my kitchen a bit, and taped a black garbage bag under a counter to keep this thing in a darker place. I soaked the block for 30 minutes as the instructions said. Then I put it in the little cave I had created. When I pulled back the black bag the following morning, I was shocked to discover a whitish dust all over the black bag and counter. I realized the mushrooms had released their spores, rendering them inedible. So I cut them all off, preparing to throw them in my compost. I found a video about regrowing oyster mushrooms from stems, so I decided to try some experiments. I pulled out my freshly used coffee grounds, put them in a jar, tossed in some chopped up stems and mixed them in. After covering the jar with plastic wrap, I put them in a dark cupboard.

Knowing that I needed a sterilized medium, I went outside and collected some old straw, dirt, and rotted branches sitting in my wheelbarrow. This would become my substrate, or what the mushroom mycelium grows in. After putting the contents in a pillowcase, I put it in boiling water for 15 minutes. Then I put down a cardboard box and dumped the whole lot on top of it. When it was cool, I mixed in chopped up stems and covered it with cardboard to keep it moist. I repeated the process and boiled more substrate. The pillow case hung out in a strainer in the sink for a while. When it was cool enough to touch, I divided the medium between 4 plates. Two were hand washed, and two had been through the dishwasher the night before. I had no idea which one would be better, so I just decided to try both. Contamination issues can be a problem, so I want to know what works best or if it even matters with this kind of mushroom. Some are more particular then others.

When the substrate was cool enough, I put it in gallon Ziploc bags. I stirred chopped stems into two of the bags. Then I began tearing apart the dried out block. I was astounded at how dry it was! I tore up chunks and mixed the mycelium into the substrate. I left some air in the bag and then zipped it up. These were put in a dark place without light. I should begin to see if this project worked in two to three weeks.
Then I divided what was left of the mushroom block into different Ziploc bags. I added quite a bit of water to it, but not so much that it was dripping. Because the sawdust was already full of mycelium, I didn’t have to wait several weeks for the substrate to be broken down. I twisted the bag and wrapped a twisty tie around it to hold the bag against the sawdust. Then I poked a few holes in it and put it back in its cave. I tried a few other experiments as well. There was a little bit of substrate left over from my 2nd batch, so I mixed up more chopped stems and threw it in a pile under a bush and covered it with leaves.

Then I took two paper towels, folded them, and ran them under a little water to make them damp. After rubbing them on the black bag of my little cave, I took them outside, put them in my garden and covered them in leaves. It was raining all day, so everything was nice and wet. Hopefully they will take!

After a few days, the bags of sawdust are turning very white. It looks very promising, and I am so excited! Experimenting with growing food is such a fun thing to do, and I highly recommend it.